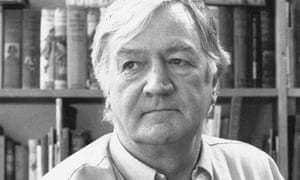 Adrian Mitchell FRSL (24 October 1932 – 20 December 2008) was an English poet, novelist and playwright. A former journalist, he became a noted figure on the British Left. For almost half a century he was the foremost poet of the country's anti-Bomb movement. The critic Kenneth Tynan called him "the British Mayakovsky".
Mitchell sought in his work to counteract the implications of his own assertion that, "Most people ignore most poetry because most poetry ignores most people."
In a National Poetry Day poll in 2005 his poem "Human Beings" was voted the one most people would like to see launched into space. In 2002 he was nominated, semi-seriously, Britain's "Shadow Poet Laureate". Mitchell was for some years poetry editor of the New Statesman, and was the first to publish an interview with the Beatles. His work for the Royal Shakespeare Company included Peter Brook's US and the English version of Peter Weiss's Marat/Sade.
Ever inspired by the example of his own favourite poet and precursor William Blake, about whom he wrote the acclaimed Tyger for the National Theatre, his often angry output swirled from anarchistic anti-war satire, through love poetry to, increasingly, stories and poems for children. He also wrote librettos. The Poetry Archive identified his creative yield as hugely prolific.
The Times said that Mitchell's had been a "forthright voice often laced with tenderness." His poems on such topics as nuclear war, Vietnam, prisons and racism had become "part of the folklore of the Left. His work was often read and sung at demonstrations and rallies."