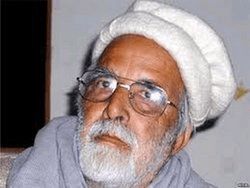 Ajmal Khattak (اجمل خټک) (اجمل خٹک) (15 September 1925 – 7 February 2010) was a Pakistani politician, writer, Pashtun poet, Khudai Khidmatgar, former President of Awami National Party and close friend of the late Khan Wali Khan.
His early student life was marked by active protests against the British Raj, which was followed by his joining of the Khudai khidmatgar movement and anti-colonial Pashto poetry. Following the independence of Pakistan in 1947. he joined the National Awami Party and became a close friend of Abdul Wali Khan.
He served as secretary general of the National Awami Party from 1969–1973. He was defeated by Abdul Haq in the 1970 general election, however following a crackdown against the Party by the government of Zulfiqar Ali Bhutto, Ajmal Khattak fled into exile to Kabul. He returned in 1989 and was elected in 1990 to the National Assembly of Pakistan, he was then elected President of the Awami National Party following the retirement of Wali Khan. Following a power struggle in 2000, he briefly formed a breakaway party which was routed in the 2002 election. He rejoined the Awami National Party shortly afterwards and retired from active politics.