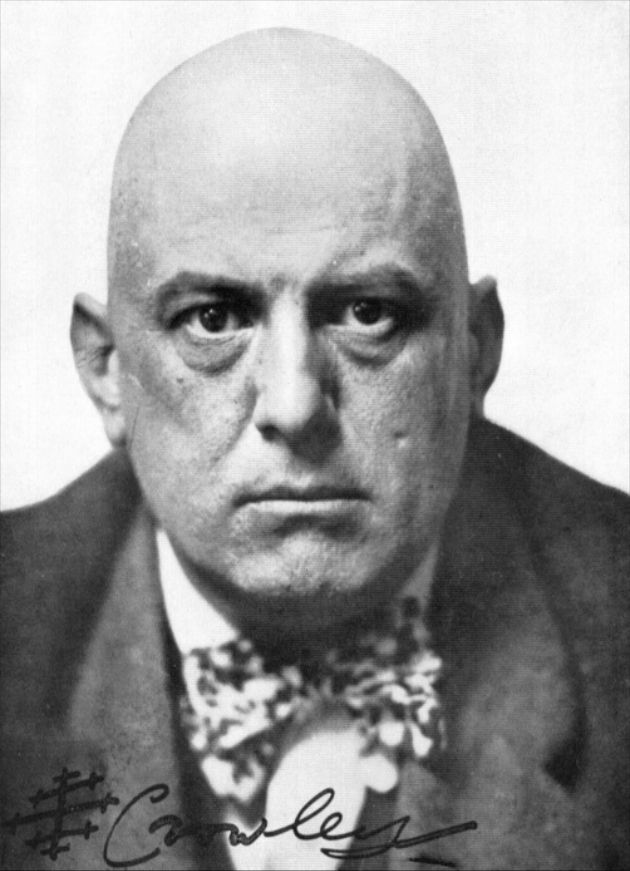 Aleister Crowley (ˈælɪstər_ˈkroʊli; born Edward Alexander Crowley; 12 October 1875 – 1 December 1947) was an English occultist, ceremonial magician, poet, painter, novelist, and mountaineer. He founded the religion of Thelema, identifying himself as the prophet entrusted with guiding humanity into the Æon of Horus in the early 20th century. A prolific writer, he published widely over the course of his life.
Born to a wealthy Plymouth Brethren family in Royal Leamington Spa, Warwickshire, Crowley rejected the fundamentalist Christian faith to pursue an interest in Western esotericism. He was educated at the University of Cambridge, where he focused his attentions on mountaineering and poetry, resulting in several publications. Some biographers allege that here he was recruited into a British intelligence agency, further suggesting that he remained a spy throughout his life. In 1898 he joined the esoteric Hermetic Order of the Golden Dawn, where he was trained in ceremonial magic by Samuel Liddell MacGregor Mathers and Allan Bennett. Moving to Boleskine House by Loch Ness in Scotland, he went mountaineering in Mexico with Oscar Eckenstein, before studying Hindu and Buddhist practices in India. He married Rose Edith Kelly and in 1904 they honeymooned in Cairo, Egypt, where Crowley claimed to have been contacted by a supernatural entity named Aiwass, who provided him with The Book of the Law, a sacred text that served as the basis for Thelema. Announcing the start of the Æon of Horus, The Book declared that its followers should "Do what thou wilt" and seek to align themselves with their True Will through the practice of magick.
After an unsuccessful attempt to climb Kanchenjunga and a visit to India and China, Crowley returned to Britain, where he attracted attention as a prolific author of poetry, novels, and occult literature. In 1907, he and George Cecil Jones co-founded a Thelemite order, the A∴A∴, through which they propagated the religion. After spending time in Algeria, in 1912 he was initiated into another esoteric order, the German-based Ordo Templi Orientis (O.T.O.), rising to become the leader of its British branch, which he reformulated in accordance with his Thelemite beliefs. Through the O.T.O., Thelemite groups were established in Britain, Australia, and North America. Crowley spent the First World War in the United States, where he took up painting and campaigned for the German war effort against Britain, later revealing that he had infiltrated the pro-German movement to assist the British intelligence services. In 1920 he established the Abbey of Thelema, a religious commune in Cefalù, Sicily where he lived with various followers. His libertine lifestyle led to denunciations in the British press, and the Italian government evicted him in 1923. He divided the following two decades between France, Germany, and England, and continued to promote Thelema until his death.
Crowley gained widespread notoriety during his lifetime, being a recreational drug experimenter, bisexual and an individualist social critic. He was denounced in the popular press as "the wickedest man in the world" and a Satanist. Crowley has remained a highly influential figure over Western esotericism and the counterculture, and continues to be considered a prophet in Thelema. He is the subject of various biographies and academic studies.