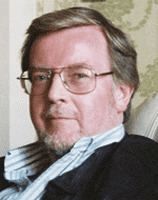 Angus Lindsay Ritchie Calder (5 February 1942 – 5 June 2008) was a Scottish academic, writer, historian, educator and literary editor with a background in English literature, politics and cultural studies. He was a man of the Left, and in his highly influential book on the home front in the Second World War he complained bitterly that the postwar reforms of the Labour government, such as universal health care and nationalization of some industries, were an inadequate reward for the wartime sacrifices, and a cynical betrayal of the people's hope for a more just postwar society.