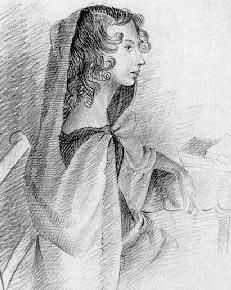 Anne Brontë (ˈbrɒnti) 17 January 1820 – 28 May 1849) was an English novelist and poet, the youngest member of the Brontë literary family.
The daughter of Patrick Brontë, a poor Irish clergyman in the Church of England, Anne Brontë lived most of her life with her family at the parish of Haworth on the Yorkshire moors. She also attended a boarding school in Mirfield between 1836 and 1837. At 19 she left Haworth and worked as a governess between 1839 and 1845. After leaving her teaching position, she fulfilled her literary ambitions. She published a volume of poetry with her sisters (Poems by Currer, Ellis, and Acton Bell, 1846) and two novels. Agnes Grey, based upon her experiences as a governess, was published in 1847. Her second and last novel, The Tenant of Wildfell Hall, which is considered to be one of the first sustained feminist novels, appeared in 1848. Like her poems, both her novels were first published under the masculine pen name of Acton Bell. Anne's life was cut short when she died of what is now suspected to be pulmonary tuberculosis at the age of 29.
Partly because the re-publication of The Tenant of Wildfell Hall was prevented by Charlotte Brontë after Anne's death, she is not as well known as her sisters. However, her novels, like those of her sisters, have become classics of English literature.