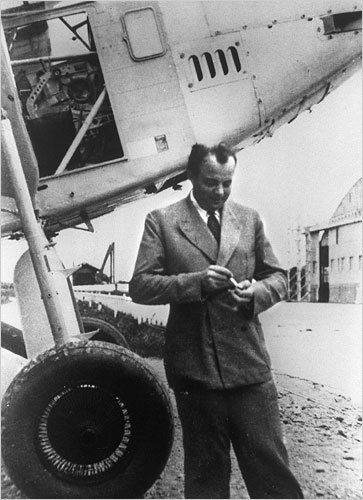 Antoine Marie Jean-Baptiste Roger, comte de Saint-ExupérySchiff 2006#tag:ref Standard modern usage for the spelling of Saint-Exupéry's surname includes the hyphen. But according to French legal documents and his birth certificate, no hyphen is used in his name; thus, it is formally de Saint Exupéry, not Saint-Exupéry. The Armorial de l'ANF, which is a listing of French nobility, mentions the Saint Exupéry (de) family without a hyphen. However, both spellings are found for the author's relatives in the advanced research facility Géopatronyme fr, for records in the Rhône department for the period 1891–1915, showing two birth certificates with a hyphen and one without. Most of his books were published under his name with a hyphen; memorial plaques, the 50-franc banknote, and the bracelet he was wearing at the time of his death also use the hyphen. The author adopted the hyphen after his arrival in the United States in 1941, as he was annoyed with Americans' addressing him as "Mr. Exupéry". (ɑ̃twan də sɛ̃tɛɡzypeʁi; 29 June 1900 – 31 July 1944) was a French writer, poet, aristocrat, journalist, and pioneering aviator. He became a laureate of several of France's highest literary awards and also won the U.S. National Book Award. He is best remembered for his novella The Little Prince (Le Petit Prince) and for his lyrical aviation writings, including Wind, Sand and Stars and Night Flight.
Saint-Exupéry was a successful commercial pilot before World War II, working airmail routes in Europe, Africa and South America. At the outbreak of war, he joined the French Air Force (Armée de l'Air), flying reconnaissance missions until France's armistice with Germany in 1940. After being demobilised from the French Air Force, he travelled to the United States to help persuade its government to enter the war against Nazi Germany. Following a 27-month hiatus in North America, during which he wrote three of his most important works, he joined the Free French Air Force in North Africa, although he was far past the maximum age for such pilots and in declining health. He disappeared over the Mediterranean on a reconnaissance mission in July 1944, and is believed to have died at that time.
Prior to the war, Saint-Exupéry had achieved fame in France as an aviator. His literary works – among them The Little Prince, translated into 300 languages and dialects – posthumously boosted his stature to national hero status in France. He earned further widespread recognition with international translations of his other works. His 1939 philosophical memoir Terre des hommes—Man and His World became the name of an international humanitarian group, and was also used to create the central theme of the most successful world's fair of the 20th century, Expo 67 in Montreal, Quebec, Canada.