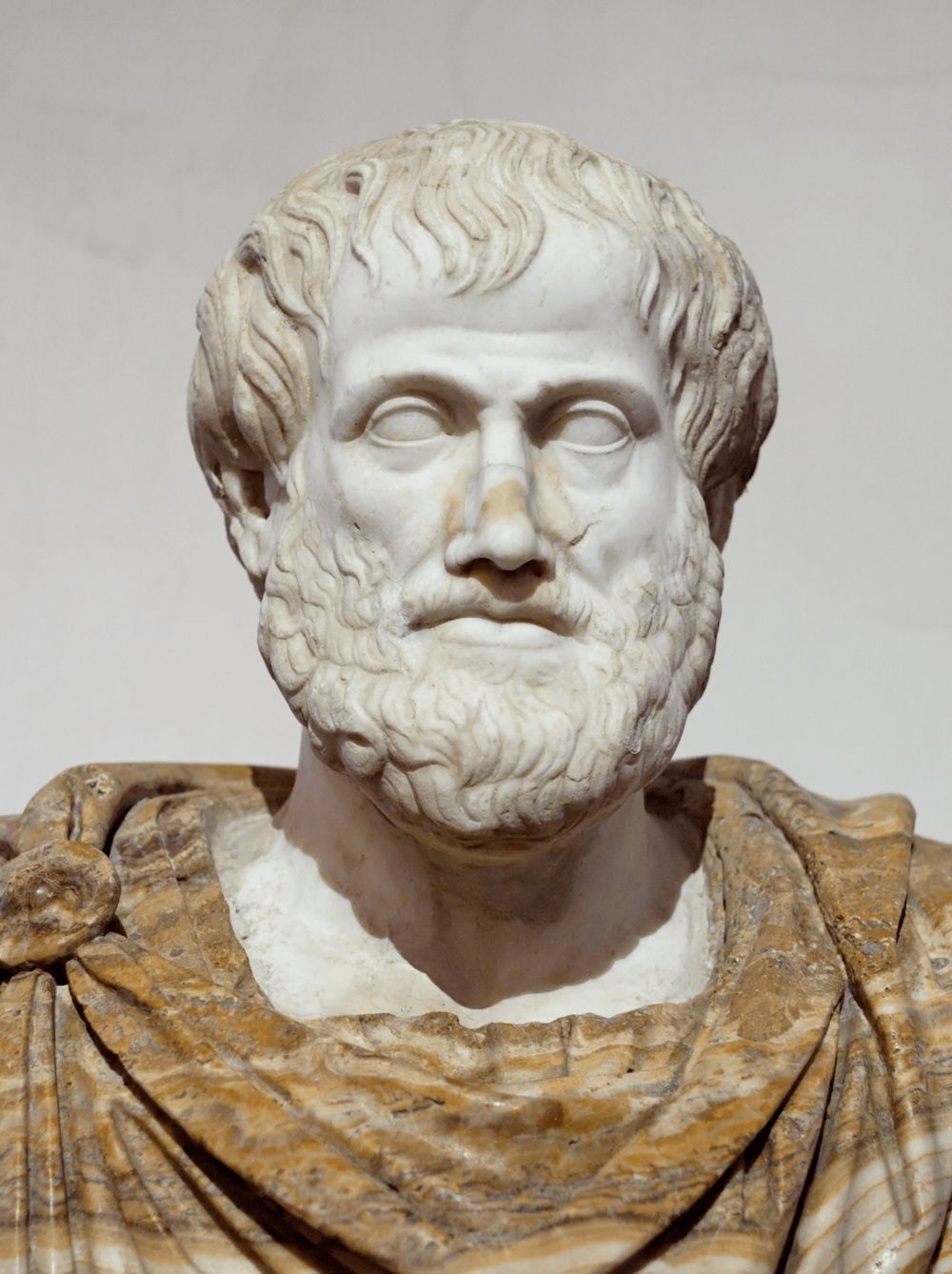 Aristotle (ˈærɪˌstɒtəl; Aristotélēs, aristotélɛːs; 384–322 BC)That these dates (the first half of the Olympiad year 384/383 BC, and in 322 shortly before the death of Demosthenes) are correct was shown by August Boeckh (Kleine Schriften VI 195); for further discussion, see Felix Jacoby on FGrHist 244 F 38. Ingemar Düring, Aristotle in the Ancient Biographical Tradition, Göteborg, 1957, p.:253 was an ancient Greek philosopher and scientist born in the city of Stagira, Chalkidiki, in the north of Classical Greece. Along with Plato, Aristotle is considered the "Father of Western Philosophy", which inherited almost its entire lexicon from his teachings, including problems and methods of inquiry, so influencing almost all forms of knowledge.
Little is known for certain about his life. His father, Nicomachus, died when Aristotle was a child, and he was brought up by a guardian. At seventeen or eighteen years of age, he joined Plato's Academy in Athens and remained there until the age of thirty-seven (c. 347 BC). His writings cover many subjects – including physics, biology, zoology, metaphysics, logic, ethics, aesthetics, poetry, theatre, music, rhetoric, psychology, linguistics, economics, politics and government – and constitute the first comprehensive system of Western philosophy. Shortly after Plato died, Aristotle left Athens and, at the request of Philip II of Macedon, tutored Alexander the Great beginning in 343 BC. Teaching Alexander gave Aristotle many opportunities. He established a library in the Lyceum which helped him to produce many of his hundreds of books, which were papyrus scrolls. The fact that Aristotle was a pupil of Plato contributed to his former views of Platonism, but, following Plato's death, Aristotle immersed himself in empirical studies and shifted from Platonism to empiricism.Barnes 1995 He believed all concepts and knowledge were ultimately based on perception. Aristotle's views on natural sciences represent the groundwork underlying many of his works.
Aristotle's views on physical science profoundly shaped medieval scholarship. Their influence extended from Late Antiquity and the Early Middle Ages into the Renaissance, and were not replaced systematically until the Enlightenment and theories such as classical mechanics. Some of Aristotle's zoological observations, such as on the hectocotyl (reproductive) arm of the octopus, were disbelieved until the 19th century. His works contain the earliest known formal study of logic, studied by medieval scholars such as Peter Abelard and John Buridan. Aristotelianism profoundly influenced Islamic thought during the Middle Ages, as well as Christian theology, especially the Neoplatonism of the Early Church and the scholastic tradition of the Catholic Church. Aristotle was revered among medieval Muslim scholars as "The First Teacher". His ethics, though always influential, gained renewed interest with the modern advent of virtue ethics.
All aspects of Aristotle's philosophy continue to be the object of academic study. Though Aristotle wrote many elegant treatises and dialogues for publication, only around a third of his original output has survived, none of it intended for publication.Barnes 1995 Aristotle has been depicted by major artists including Raphael and Rembrandt. Early Modern theories including William Harvey's circulation of the blood and Galileo Galilei's kinematics were developed in reaction to Aristotle's. In the 19th century, George Boole gave Aristotle's logic a mathematical foundation with his system of algebraic logic. In the 20th century, Martin Heidegger created a new interpretation of Aristotle's political philosophy, but elsewhere Aristotle was widely criticised, even ridiculed by thinkers such as the philosopher Bertrand Russell and the biologist Peter Medawar.Leroi 2015 More recently, Aristotle has again been taken seriously, such as in the thinking of Ayn Rand and Alasdair MacIntyre, while Armand Marie Leroi has reconstructed Aristotle's biology. The image of Aristotle tutoring the young Alexander remains current, and the Poetics continues to play a role in the cinema of the United States.