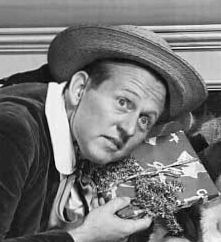 Arthur Gordon Linkletter (born Arthur Gordon Kelly, or Gordon Arthur Kelley (sources differ), July 17, 1912 – May 26, 2010) was a Canadian-born American radio and television personality. He was the host of House Party, which ran on CBS radio and television for 25 years, and People Are Funny, on NBC radio and TV for 19 years. He became a naturalized United States citizen in 1942.
One of Linkletter's lasting legacies are the many light hearted interview segments with children which appeared regularly on his daytime House Party program entitled Kids Say the Darndest Things. A best selling series of books soon followed which contained the humorous comments made on-air by these children.