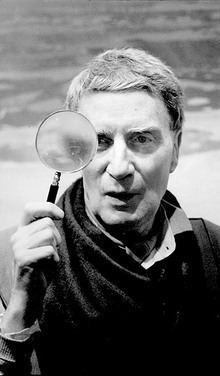 Brion Gysin (19 January 1916 – 13 July 1986) was a painter, writer, sound poet, and performance artist born in Taplow, Buckinghamshire.
He is best known for his discovery of the cut-up technique, used by his friend, the novelist William S. Burroughs. With the engineer Ian Sommerville he invented the Dreamachine, a flicker device designed as an art object to be viewed with the eyes closed. It was in painting and drawing, however, that Gysin devoted his greatest efforts, creating calligraphic works inspired by the cursive Japanese "grass" script and Arabic script. Burroughs later stated that "Brion Gysin was the only man I ever respected."