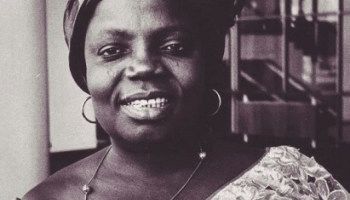 Florence Onyebuchi "Buchi" Emecheta OBE (21 July 1944 – 25 January 2017) was a Nigerian-born British novelist, based in the UK from 1962, who also wrote plays and autobiography, as well as work for children. She was the author of more than 20 books, including Second-Class Citizen (1974), The Bride Price (1976), The Slave Girl (1977) and The Joys of Motherhood (1979).
Her themes of child slavery, motherhood, female independence and freedom through education gained recognition from critics and honours. Emecheta once described her stories as "stories of the world…[where]… women face the universal problems of poverty and oppression, and the longer they stay, no matter where they have come from originally, the more the problems become identical." She has been characterized as "the first successful black woman novelist living in Britain after 1948".