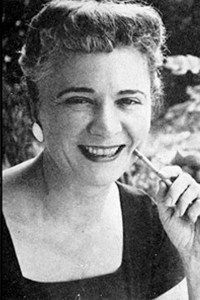 Catherine Lucille Moore (January 24, 1911 – April 4, 1987) was an American science fiction and fantasy writer, who first came to prominence in the 1930s writing as C. L. Moore. She was among the first women to write in the science fiction and fantasy genres, though earlier woman writers in these genres include Clare Winger Harris, Greye La Spina, and Francis Stevens, amongst others. Nevertheless, Moore's work paved the way for many other female speculative fiction writers.
Moore married her first husband Henry Kuttner in 1940, and most of her work from 1940-1958 (Kuttner's death) was written by the couple collaboratively. They were prolific co-authors under their own names, although more often under any one of several pseudonyms.
As "Catherine Kuttner", she had a brief career as a television scriptwriter from 1958 to 1962. She retired from writing in 1963.