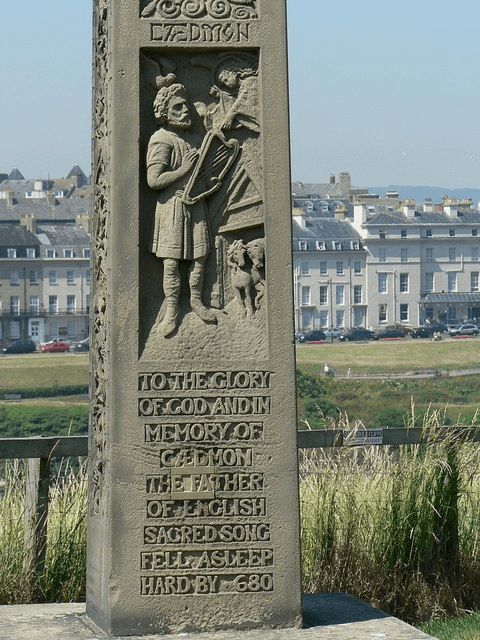 Cædmon (ˈkædmən,_ˈkædmɒn; fl. c. AD 657–684) is the earliest English (Northumbrian) poet whose name is known. An Anglo-Saxon who cared for the animals at the double monastery of Streonæshalch (Whitby Abbey) during the abbacy (657–680) of St. Hilda (614–680), he was originally ignorant of "the art of song" but learned to compose one night in the course of a dream, according to the 8th-century historian Bede. He later became a zealous monk and an accomplished and inspirational Christian poet.
Cædmon is one of twelve Anglo-Saxon poets identified in medieval sources, and one of only three of these for whom both roughly contemporary biographical information and examples of literary output have survived. His story is related in the Historia ecclesiastica gentis Anglorum ("Ecclesiastical History of the English People") by Bede who wrote, "[t]here was in the Monastery of this Abbess a certain brother particularly remarkable for the Grace of God, who was wont to make religious verses, so that whatever was interpreted to him out of scripture, he soon after put the same into poetical expressions of much sweetness and humility in Old English, which was his native language. By his verse the minds of many were often excited to despise the world, and to aspire to heaven."
Cædmon's only known surviving work is Cædmon's Hymn, the nine-line alliterative vernacular praise poem in honour of God which he supposedly learned to sing in his initial dream. The poem is one of the earliest attested examples of Old English and is, with the runic Ruthwell Cross and Franks Casket inscriptions, one of three candidates for the earliest attested example of Old English poetry. It is also one of the earliest recorded examples of sustained poetry in a Germanic language. In 1898, Cædmon's Cross was erected in his honour in the graveyard of St Mary's Church in Whitby.