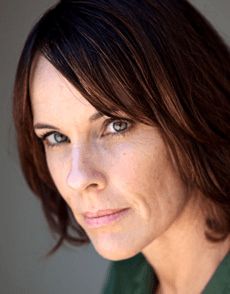 Caroline Paul (born July 29, 1963 in New York City) is an American writer of fiction and non-fiction. She was raised in Connecticut (her father was an investment banker, her mother a social worker), and educated in journalism and documentary film at Stanford University. She worked as a journalist at Berkeley public radio station KPFA before (in 1988) joining the San Francisco Fire Department, as one of the first women hired by the department. She worked most of her career on Rescue 2, where she and her crew were responsible for search and rescue in fires. Rescue 2 members were also trained and sent on scuba dive searches, rope and rappelling rescues, surf rescues, confined space rescues, all hazardous material calls, and the most severe train and car wrecks.
Her first book was the nonfiction memoir Fighting Fire, published in 1998. Her second, the 2006 historical novel East Wind, Rain is based on the Niihau Incident, a historical event in which a Japanese pilot crash-landed on the private Hawaiian island of Niihau, after the attack on Pearl Harbor. "When it's over, we don't want to leave," said the New York Times review of the book. Lost Cat, A True Story of Love, Desperation, and GPS Technology was published in 2013 and illustrated by her partner, artist Wendy MacNaughton. It details Paul and MacNaughton's high-tech search for their cat. The PBS Newshour described the book as "A thoughtful, kind and funny story about the love people can have for their pets and the weird places that this love and accompanying devotion can take them. But it also travels beyond the realm of human-pet relationships, offering commentary on all relationships and the roles of those we love, and sometimes don't love, in our lives."
Paul's latest book is the New York Times bestseller The Gutsy Girl, Escapades for Your Life of Epic Adventure. She calls it "Lean in for girls, set not in a boardroom, but in trees, on cliff edges and down wild rivers". In a controversial New York Times essay that preceded publication she wrote that risk teaches kids responsibility, problem solving, and confidence. "...By cautioning girls away from these experiences we are not protecting them. We are woefully under-preparing them for life."
She is a member of the San Francisco Writers’ Grotto, a workspace and literary community whose members have included Po Bronson, Mary Roach, ZZ Packer, Noah Hawley, Ethan Canin, Julia Scheeres, Vendela Vida, and TJ Stiles.
Her identical twin sister is Baywatch actress Alexandra Paul. The two sisters were featured in a People magazine feature on twins, "Seeing Double," in 1998. Her younger brother Jonathan Paul is a militant animal rights activist; he was released in 2011 after serving a four-year sentence in federal prison for the 1997 arson of a slaughterhouse in Redmond, Oregon.
Caroline flies ultralights and paragliders. An accomplished athlete, she has competed on the U.S. National Luge Team in trials for the Olympics.