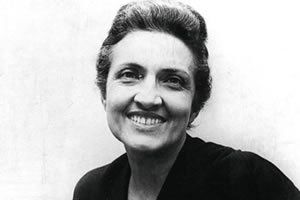 Cecília Benevides de Carvalho Meireles (7 November 1901 – 9 November 1964) was a Brazilian writer and educator, known principally as a poet. She is a canonical name of Brazilian Modernism, one of the great female poets in the Portuguese language, and is widely considered the best female poet from Brazil, though she combatted the word poetess because of gender discrimination.
She traveled in the Americas in the 1940s, visiting the United States, Mexico, Argentina, Uruguay and Chile. In the summer of 1940 she gave lectures at the University of Texas, Austin. She wrote two poems about her time in the capital of Texas, and a long (800 lines) very socially aware poem "USA 1940", which was published posthumously. As a journalist her columns (crônicas, or chronicles) focused most often on education, but also on her trips abroad in the western hemisphere, Portugal, other parts of Europe, Israel, and India (where she received an honorary doctorate).
As a poet, her style was mostly neosymbolist and her themes included ephemeral time and the contemplative life. Even though she was not concerned with local color, native vernacular, or experiments in (popular) syntax, she is considered one of the most important poets of the second phase of the Brazilian Modernism, known for nationalistic vanguardism. As a teacher she did much to promote educational reforms and advocated the construction of children's libraries. Between 1935 and 1938 she taught at the short-lived federal-district university in Rio.