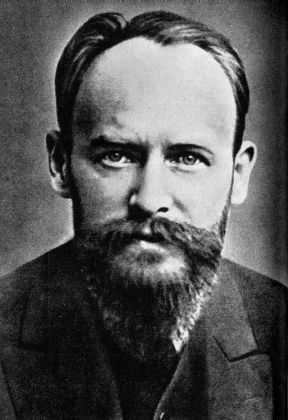 Christian Otto Josef Wolfgang Morgenstern (6 May 1871 – 31 March 1914) was a German author and poet from Munich. Morgenstern married Margareta Gosebruch von Liechtenstern on 7 March 1910. He worked for a while as a journalist in Berlin, but spent much of his life traveling through Germany, Switzerland, and Italy, primarily in a vain attempt to recover his health. His travels, though they failed to restore him to health, allowed him to meet many of the foremost literary and philosophical figures of his time in central Europe.
Morgenstern's poetry, much of which was inspired by English literary nonsense, is immensely popular, even though he enjoyed very little success during his lifetime. He made fun of scholasticism, e.g. literary criticism in "Drei Hasen", grammar in "Der Werwolf", narrow-mindedness in "Der Gaul", and symbolism in "Der Wasseresel". In "Scholastikerprobleme" he discussed how many angels could sit on a needle. Still many Germans know some of his poems and quotations by heart, e.g. the following line from "The Impossible Fact" ("Die unmögliche Tatsache", 1910):
Embedded in his humorous poetry is a subtle metaphysical streak, as e.g. in "Vice Versa", (1905):
Ein Hase sitzt auf einer Wiese, des Glaubens, niemand sähe diese. Doch im Besitze eines Zeißes betrachtet voll gehaltnen Fleißes vom vis-à-vis gelegnen Berg ein Mensch den kleinen Löffelzwerg. Ihn aber blickt hinwiederum ein Gott von fern an, mild und stumm. "A rabbit in his meadow lair Imagines none to see him there. But aided by a looking lens A man with eager diligence Inspects the tiny long-eared gnome From a convenient near-by dome. Yet him surveys, or so we learn A god from far off, mild and stern."
Gerolf Steiner's mock-scientific book about the fictitious animal order Rhinogradentia (1961), inspired by Morgenstern's nonsense poem Das Nasobēm, is testament to his enduring popularity.
Morgenstern was a member of the General Anthroposophical Society. Dr. Rudolf Steiner called him 'a true representative of Anthroposophy'.
Morgenstern died in 1914 of tuberculosis, which he had contracted from his mother, who died in 1881.