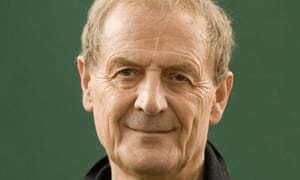 Clive Wilmer (born 10 February 1945) is a British poet, who has published eight volumes of poetry. He is also a critic, literary journalist, broadcaster and lecturer.
Wilmer was born in Harrogate, Yorkshire and attended Emanuel School and King's College, Cambridge. He is the brother of writer and photographer Val Wilmer. He has a daughter, a son and two grandsons. He shares his life with the historian of science Patricia Fara.
Wilmer's poetry is usually formal but occasionally experimental. He sees religion as fundamental to what he writes, yet he does not associate himself with a parochial view of spiritual matters. His work is also marked by an enthusiasm for architecture and visual culture.
He is currently resident in Cambridge, where he is Emeritus Fellow of Sidney Sussex College. He is also an Honorary Fellow of Anglia Ruskin University, an Anniversary Fellow of Whitelands College, University of Roehampton, and an Honorary Patron of the William Morris Gallery, Walthamstow.
He has had various teaching jobs in Italy – in Florence, Verona, Padua and Venice. In 2015 he was a Visiting Professor at Ca' Foscari University of Venice.
He is interested in the art of verse translation and has translated himself from several languages, In particular, he has translated in collaboration with the Hungarian poet George Gömöri. Together they have translated selections from Miklós Radnóti, György Petri, János Pilinszky and Gömöri himself, as well as individual pieces by several others. Wilmer’s own poems have been translated into Hungarian, Italian and Spanish.
Wilmer was the prime mover of the Ezra Pound centenary exhibition Pound's Artists: Ezra Pound and the Visual Arts in London, Paris and Italy, held at Kettle's Yard and the Tate Gallery in 1985. From 1986 to 1990 he was one of the four founding editors of the magazine Numbers.
He is an enthusiastic advocate for the work of the Victorian critic, artist, philanthropist and social reformer John Ruskin. Since 2004, he has been a Director of the Guild of St George, the charity founded by Ruskin. He became Master of the Guild in 2009. He has also written extensively on William Morris.
Among contemporary writers, Wilmer has written on the work of the poets Thom Gunn and Donald Davie and has edited volumes of their essays. His annotated edition of Gunn's Selected Poems was published by Faber and Faber in 2017.