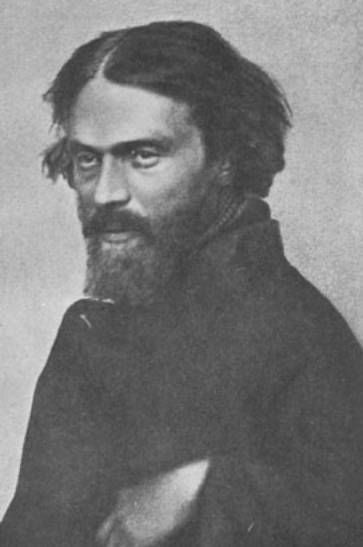 Cyprian Kamil Norwid, a.k.a. Cyprian Konstanty Norwid (ˈt͡sɨprjan ˈnɔrvid; 24 September 1821 – 23 May 1883), was a nationally esteemed Polish poet, dramatist, painter, and sculptor. He was born in the Masovian village of Laskowo-Głuchy near Warsaw. One of his maternal ancestors was the Polish King John III Sobieski.
Norwid is regarded as one of the second generation of romantics. He wrote many well-known poems including Fortepian Szopena ("Chopin's Piano"), Moja piosnka [II] ("My Song [II]") and Bema pamięci żałobny-rapsod (A Funeral Rhapsody in Memory of General Bem). Norwid led a tragic and often poverty-stricken life (once he had to live in a cemetery crypt). He experienced increasing health problems, unrequited love, harsh critical reviews, and increasing social isolation. He lived abroad most of his life, especially in London and, in Paris where he died.
Norwid's original and non-conformist style was not appreciated in his lifetime and partially due to this fact, he was excluded from high society. His work was only rediscovered and appreciated by the Young Poland art movement of the late nineteenth and early twentieth century. He is now considered one of the four most important Polish Romantic poets. Other literary historians, however, consider this an oversimplification, and regard his style to be more characteristic of classicism and parnassianism.