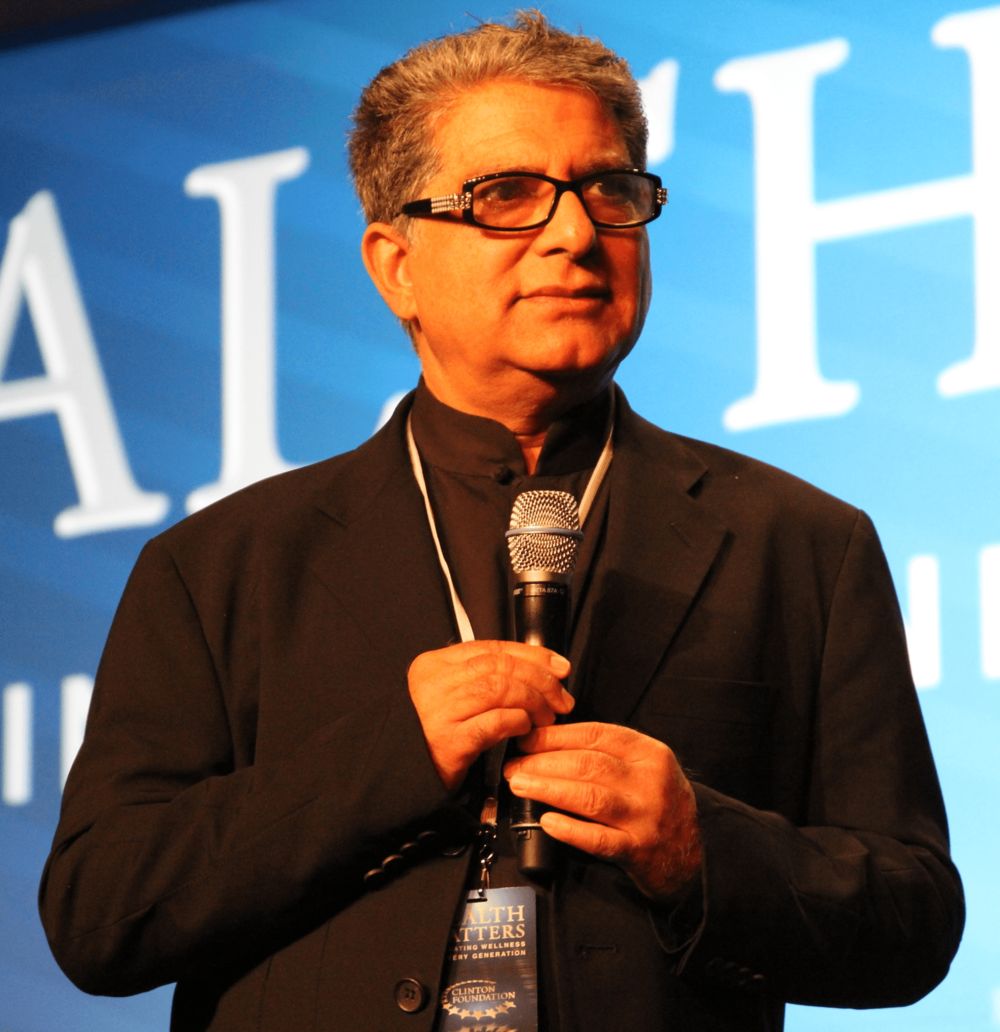 Deepak Chopra (ˈdiːpɑːk_ˈtʃoʊprə; d̪iːpək tʃoːpraː; born October 22, 1946) is an Indian-born American author, public speaker, alternative medicine advocate, and a prominent figure in the New Age movement. Through his books and videos, he has become one of the best-known and wealthiest figures in alternative medicine.
Chopra studied medicine in India before emigrating to the United States in 1970 where he completed residencies in internal medicine and endocrinology. As a licensed physician, he became chief of staff at the New England Memorial Hospital (NEMH) in 1980. He met Maharishi Mahesh Yogi in 1985 and became involved with the Transcendental Meditation movement (TM). He resigned his position at NEMH shortly thereafter to establish the Maharishi Ayurveda Health Center. Chopra gained a following in 1993 after he was interviewed on The Oprah Winfrey Show about his books. He then left the TM movement to become the executive director of Sharp HealthCare's Center for Mind-Body Medicine and in 1996 he co-founded the Chopra Center for Wellbeing.
Chopra believes that a person may attain "perfect health", a condition "that is free from disease, that never feels pain", and "that cannot age or die". Seeing the human body as being undergirded by a "quantum mechanical body" composed not of matter but of energy and information, he believes that "human aging is fluid and changeable; it can speed up, slow down, stop for a time, and even reverse itself," as determined by one's state of mind. He claims that his practices can also treat chronic disease. as of:2014, Deepak Chopra lived in a "health-centric" condominium in Manhattan.
The ideas Chopra promotes have been regularly criticized by medical and scientific professionals as pseudoscience. This criticism has been described as ranging "from dismissive [to] damning". For example, Robert Carroll states Chopra attempts to integrate Ayurveda with quantum mechanics to justify his teachings. Chopra argues that what he calls "quantum healing" cures any manner of ailments, including cancer, through effects that he claims are literally based on the same principles as quantum mechanics. This has led physicists to object to his use of the term quantum in reference to medical conditions and the human body. His treatments generally elicit nothing but a placebo response, and have drawn criticism that the unwarranted claims made for them may raise "false hope" and lure sick people away from legitimate medical treatments. He is placed by David Gorski among the "quacks", "cranks" and "purveyors of woo", and described as "arrogantly obstinate". Richard Dawkins has said that Chopra uses "quantum jargon as plausible-sounding hocus pocus".