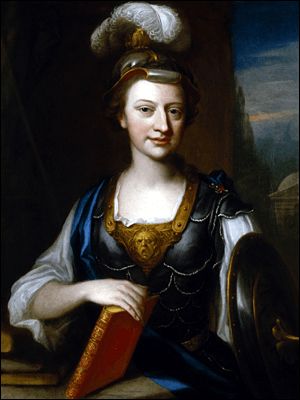 Elizabeth Carter (pen name, Eliza; 16 December 171719 February 1806) was an English poet, classicist, writer, translator, linguist, and polymath. She was a member of the Bluestocking Circle that surrounded Elizabeth Montagu. She earned literary respect by producing the first English translation of the Discourses of Epictetus by the 2nd-century Stoic philosopher Epictetus.Barbauld 2001 She published some poems, and translated writings from French and Italian. Otherwise most of her literary output was in the form of correspondence to family and friends.Williams 1861
Carter was friends with many eminent people, and a close confidant of Elizabeth Montagu, Hannah More, Hester Chapone, and other members of the Bluestocking circle. Anne Hunter, a minor poet and socialite, and Mary Delany were also noted as close friends. She also befriended Samuel Johnson, editing some editions of his periodical The Rambler.