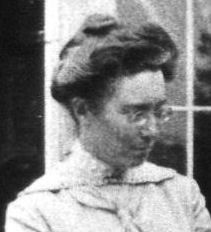 Elsie Jeanette Dunkerley (25 November 1880 – 9 January 1960), was an English girls' story writer, who took the name Oxenham as her pseudonym when her first book, Goblin Island, was published in 1907. Her Abbey Series of 38 titles are her best-known and best-loved books. In her lifetime she had 87 titles published and another two have since been published by her niece, who discovered the manuscripts in the early 1990s. She is considered a major figure among girls' story writers of the first half of the twentieth century, being one of the 'Big Three' with Elinor Brent-Dyer and Dorita Fairlie Bruce. Angela Brazil is as well-known - perhaps more so - but did not write her books in series about the same group of characters or set in the same place or school, as did the Big Three.
Oxenham's books are widely collected and there are several Appreciation Societies: in the UK, Australia, New Zealand and South Africa; with a total membership of over six hundred, some of whom live in the US, Canada, India and The Netherlands although belonging to one or more of the societies mentioned.