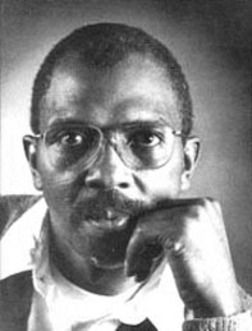 Etheridge Knight (April 19, 1931 – March 10, 1991) was an African-American poet who made his name in 1968 with his debut volume, Poems from Prison. The book recalls in verse his eight-year-long sentence after his arrest for robbery in 1960. By the time he left prison, Knight had prepared a second volume featuring his own writings and works of his fellow inmates. This second book, first published in Italy under the title Voce negre dal carcere, appeared in English in 1970 as Black Voices from Prison. These works established Knight as one of the major poets of the Black Arts Movement, which flourished from the early 1960s through the mid-1970s. With roots in the Civil Rights Movement, Malcolm X and the Nation of Islam, and the Black Power Movement, Etheridge Knight and other American artists within the movement sought to create politically engaged work that explored the African-American cultural and historical experience.
Knight is also considered an important poet in the mainstream American tradition. In his 2012 book Understanding Etheridge Knight, Michael S. Collins calls Knight "a mighty American poet....He and Wallace Stevens stand as 'two poles of American poetry,' according to his better-known fellow writer Robert Bly. Or, rather, Knight was, as he often said, a poet of the belly: a poet of the earth and of the body, a poet of the feelings from which cries and blood oaths and arias come, while Stevens was a poet, arguably, of the ache left in the intellect after it tears itself from God. 'Ideas are not the source of poetry,' Knight told one interviewer. 'For me it's passion and feeling....'"