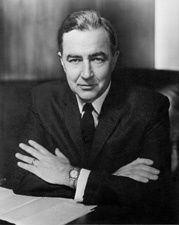 Eugene Joseph McCarthy (March 29, 1916 – December 10, 2005) was an American politician, poet, and a long-time Congressman from Minnesota. He served in the United States House of Representatives from 1949 to 1959 and the United States Senate from 1959 to 1971. McCarthy sought the Democratic nomination in the 1968 presidential election, challenging incumbent Lyndon B. Johnson on an anti-Vietnam War platform. McCarthy would unsuccessfully seek the presidency five times.
Born in Watkins, Minnesota, McCarthy became an economics professor after earning a graduate degree from the University of Minnesota. He served as a codebreaker for the United States Department of War during World War II. McCarthy became a member of the Minnesota Democratic–Farmer–Labor Party (the state affiliate of the Democratic Party) and won election to the House of Representatives in 1948. He served until winning election to the Senate in 1958. McCarthy was a prominent supporter of Adlai Stevenson II for the Democratic presidential nomination in 1960 and was himself a candidate for the Democratic vice presidential nomination in 1964. He co-sponsored the Immigration and Nationality Act of 1965, though he later expressed regret about the impact of the bill and became a member of the Federation for American Immigration Reform.
As the 1960s progressed, McCarthy emerged as a prominent opponent of President Johnson's handling of the Vietnam War. After Robert Kennedy declined the request of a group of anti-war Democrats to challenge Johnson in the 1968 Democratic primaries, McCarthy entered the race on an anti-war platform. Though he was initially given little chance of winning, the Tet Offensive galvanized opposition to the war and McCarthy finished in a strong second place in the New Hampshire primary. After that primary election, Kennedy entered the race and Johnson announced that he would not seek re-election. McCarthy and Kennedy each won several primaries before Kennedy was assassinated in June 1968. Despite the outcome of the primary elections, the 1968 Democratic National Convention chose Vice President Hubert Humphrey, Johnson's preferred candidate, as its presidential nominee.
McCarthy did not seek re-election in the 1970 Senate election. He sought the Democratic presidential nomination in 1972 but fared poorly in the primaries. He ran in several more races after that, but never won election to another office. He ran as independent in the 1976 presidential election and won 0.9% of the popular vote. He was a plaintiff in the landmark campaign finance case of Buckley v. Valeo and supported Ronald Reagan in the 1980 presidential election.