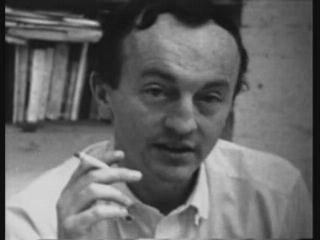 Francis Russell "Frank" O'Hara (March 27, 1926 – July 25, 1966) was an American writer, poet and art critic. Because of his employment as a curator at the Museum of Modern Art, O'Hara became prominent in New York City's art world. O'Hara is regarded as a leading figure in the New York School—an informal group of artists, writers and musicians who drew inspiration from jazz, surrealism, abstract expressionism, action painting and contemporary avant-garde art movements.
O'Hara's poetry is personal in tone and in content and has been described as sounding "like entries in a diary". Poet and critic Mark Doty has said O'Hara's poetry is "urbane, ironic, sometimes genuinely celebratory and often wildly funny" containing "material and associations alien to academic verse" such as "the camp icons of movie stars of the twenties and thirties, the daily landscape of social activity in Manhattan, jazz music, telephone calls from friends". O'Hara's writing sought to capture in his poetry the immediacy of life, feeling that poetry should be "between two persons instead of two pages."
The Collected Poems of Frank O'Hara edited by Donald Allen (Knopf, 1971), the first of several posthumous collections, shared the 1972 National Book Award for Poetry.