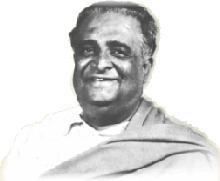 Gajānan Digambar Mādguḷkar (1 October 1919 – 14 December 1977) was a Marāthi poet, lyricist, writer and actor from India. He is popularly known in his home state of Mahārāshtra by just his initials as Ga Di Mā (गदिमा). He was awarded Sangeet Natak Akademi Award in 1951 and Padma Shri in 1969. He has written 157 screen play and over 2000 songs in his career. He was called Ādhunik Valmiki (the modern Valmiki) of current era due to his composition of Geet Rāmāyan (lit. Ramayana in Songs) as the most notable work.