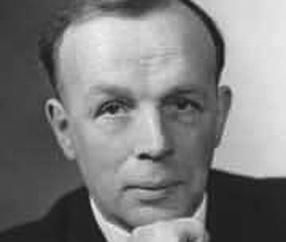 (Robert) Geoffrey Trease FRSL (11 August 1909 in Nottingham – 27 January 1998 in Bath) was a prolific British writer who published 113 books, mainly for children, between 1934 (Bows Against the Barons) and 1997 (Cloak for a Spy). His work has been translated into 20 languages. His grandfather was a historian, and was one of the main influences on his work. He is best known for the children's novel Cue for Treason (1940).
Trease is best known for writing children's historical novels, whose content reflects his insistence on historically correct backgrounds, which he meticulously researched. His ground-breaking study Tales Out of School (1949) pioneered the idea that children's literature should be a serious subject for study and debate. When he began his career, his radical viewpoint was a change from the conventional and often jingoistic tone of most children's literature of the time, and he was one of the first authors who deliberately set out to appeal to both boys and girls and to feature strong leading characters of both sexes.