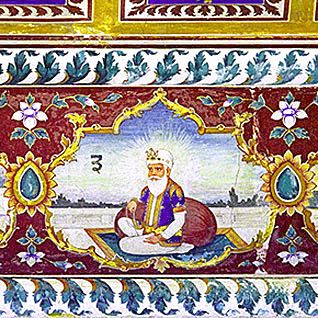 Guru Amar Das (ɡʊru əməɾ dɑs; 5 May 1479 – 1 September 1574) was the third of the Ten Gurus of Sikhism and became Sikh Guru on 26 March 1552 at age 73.
Before becoming a Sikh, Amar Das had adhered to the Vaishnavism tradition of Hinduism for much of his life. One day he heard his nephew's wife, Bibi Amro, reciting a hymn by Guru Nanak, and was deeply moved by it. Bibi Amro was the daughter of Guru Angad, the second and then current Guru of the Sikhs. Amar Das persuaded Bibi Amro to introduce him to her father and in 1539, Amar Das, at the age of sixty, met Guru Angad and became a Sikh, devoting himself to the Guru. In 1552, before his death, Guru Angad appointed Amar Das as Guru Amar Das, the third Guru of Sikhism.
Guru Amar Das was an important innovator in Sikhism, who introduced a religious organization called the Manji system by appointing trained clergy, a system that expanded and survives into the contemporary era. He wrote and compiled hymns into a Pothi (book) that ultimately helped create the Adi Granth. Guru Amar Das helped establish the Sikh rituals relating to baby naming, wedding (Anand Karaj), and funeral, as well as the practice of congregation and celebrations of festivals such as Diwali, Maghi and Vaisakhi. He founded centres of Sikh pilgrimage, and picked the site for the Golden Temple.
Guru Amar Das remained the leader of the Sikhs till age 95, and named his son-in-law Bhai Jetha later remembered by the name Guru Ram Das as his successor.