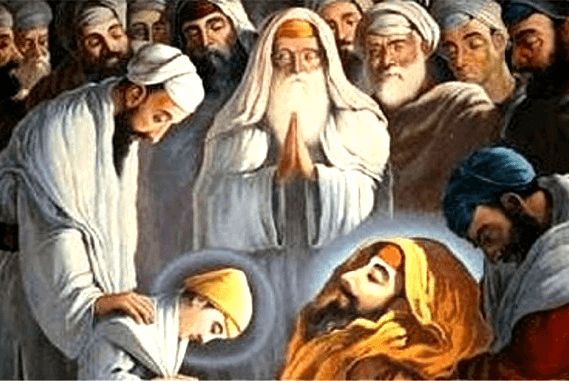 Guru Tegh Bahadur (ɡʊru teɣ bəhɑdʊɾ; 1 April 1621 – 24 November 1675,) was the ninth of ten Gurus of the Sikh religion. Tegh Bahadur continued in the spirit of the first guru, Nanak; his 116 poetic hymns are registered in Guru Granth Sahib. Guru Tegh Bahadur resisted the forced conversions of Kashmiri Pandits and non-Muslims to Islam, and was publicly beheaded in 1675 on the orders of Mughal emperor Aurangzeb in Delhi for himself refusing to convert to Islam. Gurudwara Sis Ganj Sahib and Gurdwara Rakab Ganj Sahib in Delhi mark the places of execution and cremation of the Guru's body. The martyrdom of Guru Tegh Bahadur is remembered as the Shaheedi Divas of Guru Tegh Bahadur every year on 24 November, according to the Nanakshahi calendar released by the Shiromani Gurdwara Parbandhak Committee in 2003.