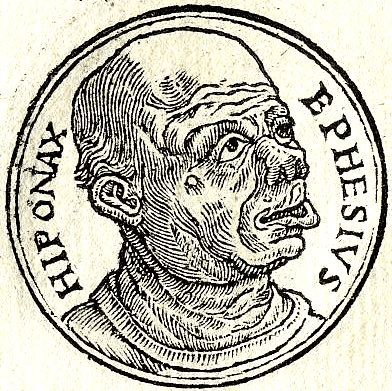 Hipponax (; gen.: Ἱππώνακτος), of Ephesus and later Clazomenae, was an Ancient Greek iambic poet who composed verses depicting the vulgar side of life in Ionian society in the sixth century BC. He was celebrated by ancient authors for his malicious wit (especially for his attacks on some contemporary sculptors, Bupalus and Athenis), and he was reputed to be physically deformed (a reputation that might have been inspired by the nature of his poetry). Little of his work survives despite its interest to Alexandrian scholars, who collected it in two or three books. He influenced Alexandrian poets searching for alternative styles and uses of language, such as Callimachus and Herodas, and his colourful reputation as an acerbic, social critic also made him a popular subject for verse, as in this epigram by Theocritus:
Ancient literary critics credited him with inventing literary parody and "lame" poetic meters suitable for vigorous abuse, as well as with influencing comic dramatists such as Aristophanes. His witty, abusive style appears for example in this quote by Herodian, who however was mainly interested in its linguistic aspects (many of the extant verses were preserved for us by lexicographers and grammarians interested in rare words):
where 'navel-snipper' signifies a midwife.