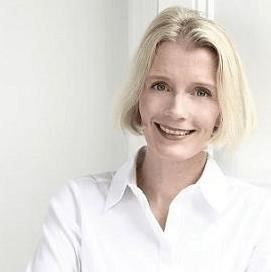 Wendy Holden (born 12 June 1965) is a best-selling British novelist.
Holden was born and raised in Cleckheaton, West Yorkshire. She read English at Girton College, Cambridge, graduating from Cambridge University in the mid-1980s, and then moved to London where she found work in the magazine business, eventually working for The Diplomat monthly, where she became an editor, and from there, she moved on to The Sunday Times. One of her responsibilities at the title was ghostwriting a column on behalf of socialite Tara Palmer-Tomkinson, an experience which Holden says influenced her first novel, Simply Divine.
Simply Divine was published in 1999, and Holden went on to write a series of novels, most of which were bestsellers, and which she happily describes as "chick lit" and "supermarket novels."
Holden is married, has two children, and now lives in the Derbyshire Peak District.