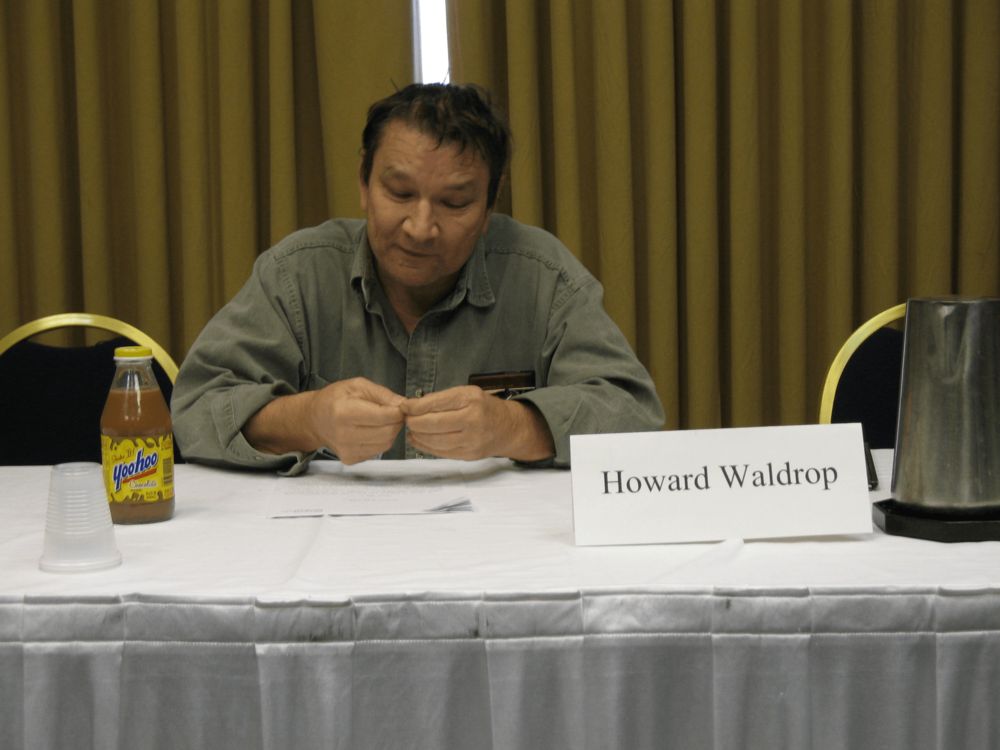 Howard Waldrop (born September 15, 1946, in Houston, Mississippi) is a science fiction author who works primarily in short fiction.
Waldrop's stories combine elements such as alternate history, American popular culture, the American South, old movies (and character actors), classical mythology, and rock 'n' roll music. His style is sometimes obscure or elliptical: Night of the Cooters is a pastiche of H. G. Wells' The War of the Worlds told from the perspective of a small town Texas sheriff (a homage to Slim Pickens) who faces a Martian cylinder crashing down near his town; "Heirs of the Perisphere" involves robotic Disney characters waking up in the far future; "Fin de Cyclé" describes the Dreyfus affair from the perspective of bicycle enthusiasts.
Waldrop's work is frequently out-of-print, though still available for sale on-line; several of his books have been reprinted in omnibus editions.
Several of his stories have been nominated for the genre's awards; "The Ugly Chickens" — about the extinction of the dodo — won a Nebula Award for best novelette in 1980, and also a World Fantasy Award for Short Fiction in 1981; this is perhaps his best known work.
Though born in Mississippi, Waldrop has spent most of his life in Texas. He moved to Washington state for several years, but has since returned to Austin. He is an avid fly fisherman. He is a member of the Turkey City Writer's Workshop, has attended the Rio Hondo Writing Workshop, and has taught at the Clarion Workshop. In 2004 he started writing movie reviews with Lawrence Person for Locus Online.
He is a frequent attendee of ArmadilloCon, the local science fiction convention held annually in Austin. He was the Toastmaster at the very first ArmadilloCon (1979) and again at #29 in 2007; he was Guest of Honor at ArmadilloCon 5 (1983).
Waldrop was one of three writer Guests of Honor at the 1995 World Fantasy Convention held in Baltimore and at Readercon 15 held in Burlington, Massachusetts, in 2003.