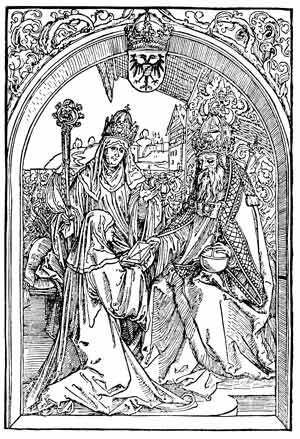 Hrotsvitha of Gandersheim (c. 935 – after 973) was a 10th-century German secular canoness, dramatist and poetess who lived at Gandersheim Abbey (in modern-day Bad Gandersheim, Lower Saxony), established by the Ottonian dynasty.
She wrote in Latin, and is considered by some to be the first person since antiquity to compose drama in the Latin West. Wilson 1984 She is one of the very few women who wrote about her life during early middle ages, a history of women in that era from a woman's perspective. She has been called "the most remarkable woman of her time".
Hrotsvitha's name appears variously in the forms Hrosvite, Hroswitha, Hroswithe, Rhotswitha, Roswit and is modernized as Roswitha but the proper pronunciation is Hrotsuit. The name is Old Saxon for "strong honour", which she re-interpreted to mean "a clarion voice".