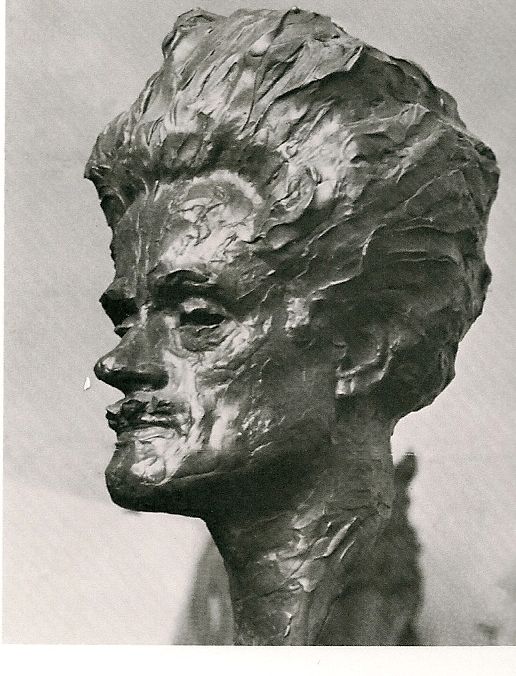 Christopher Murray Grieve (11 August 1892 – 9 September 1978), known by his pen name Hugh MacDiarmid (məkˈdɜːrmɪd), was a Scottish poet, journalist, essayist and political figure. He is best known for his works written in 'synthetic Scots', a literary version of the Scots language that MacDiarmid himself developed. However, Grieve's earliest work -- such as Annals of the Five Senses was written in English, and from the early 1930s onwards much of the poetry published under MacDiarmid's name was written in an English that was supplemented to varying degrees by scientific and technical vocabularies.
The son of a postman, MacDiarmid was born in the Scottish border town of Langholm, Dumfriesshire. He was educated at Langholm Academy before becoming a teacher for a brief time at Broughton Higher Grade School in Edinburgh. He began his writing career as a journalist in Wales, contributing to the socialist newspaper The Merthyr Pioneer run by Labour party founder Keir Hardie before joining the Royal Army Medical Corps on the outbreak of the First World War. He served in Salonica, Greece and France before developing cerebral malaria and subsequently returning to Scotland in 1918. MacDiarmid's time in the army was influential in his political and artistic development.
After the war he continued to work as a journalist, living in Montrose where he became editor and reporter of the Montrose Review as well as a justice of the peace and a member of the county council. In 1923 his first book, Annals of the Five Senses, was published at his own expense, followed by 'Sangschaw' in 1925 and 'Penny Wheep' and 'A Drunk Man Looks at the Thistle' in 1926. A Drunk Man Looks at the Thistle, is generally regarded as MacDiarmid's most famous and influential work.
Moving to the Shetland island of Whalsay in 1933 with his son Michael and second wife, Valda Trevlyn, MacDiarmid continued to write essays and poetry despite being cut off from mainland cultural developments for much of the 1930s. He died at his cottage Brownsbank, near Biggar, in 1978 at the age of 86.
MacDiarmid was during his life a supporter of both communism and Scottish nationalism, views that often put him at odds with his contemporaries. He was a founding member of the National Party of Scotland (forerunner of the modern Scottish National Party) and stood as a candidate for the Scottish National Party in 1945 and 1950, and for the Communist Party of Great Britain in 1964.
A controversial figure whilst alive, MacDiarmid is now considered one of the principal forces behind the Scottish Renaissance and has had a lasting impact on Scottish culture and politics. Fellow poet Edwin Morgan said of him: 'Eccentric and often maddening genius he may be, but MacDiarmid has produced many works which, in the only test possible, go on haunting the mind and memory and casting Coleridgean seeds of insight and surprise.’