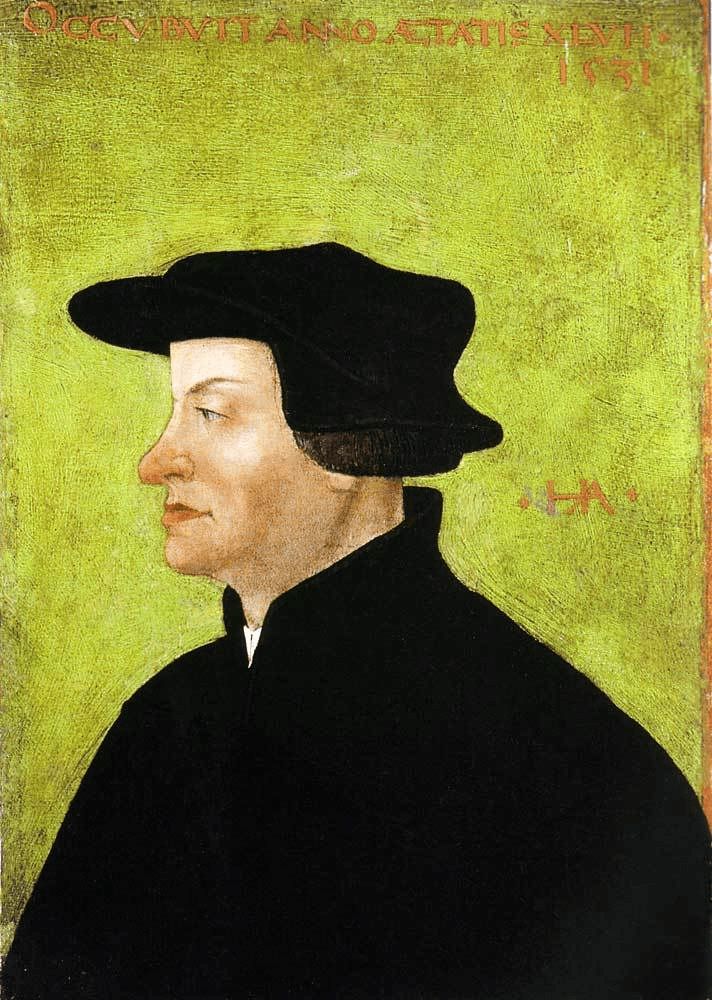 Zwingli the main-belt asteroid 7908 Zwingli Huldrych ZwingliHuldrych pronunciation: ˈhʊldriːç; Ulrich: ˈʊlrɪç; Zwingli: 'zwɪŋgli, ˈtsvɪŋli (Random House Webster's Unabridged Dictionary: "Zwingli"). or Ulrich ZwingliZwingli's given name was Ulrich, but he used the latinized spelling Huldricus or Huldrychus Zwinglius. In his enrolment in the University of Vienna (1500), he still latinised his name as Udalricus Zwingling de Lichtensteig (Jackson 1900).His signature at the Marburg Colloquy (1529) was Huldrychus Zwinglius (Bainton 1995; Schuler, Schultess (eds.), Huldrici Zuinglii opera, 1830, p. 55). Modern literature uses either "Ulrich" or "Huldrych" (e.g. Potter uses "Ulrich", while Gäbler, Stephens, and Furcha use "Huldrych").
(1 January 1484 – 11 October 1531) was a leader of the Reformation in Switzerland. Born during a time of emerging Swiss patriotism and increasing criticism of the Swiss mercenary system, he attended the University of Vienna and the University of Basel, a scholarly center of Renaissance humanism. He continued his studies while he served as a pastor in Glarus and later in Einsiedeln, where he was influenced by the writings of Erasmus.
In 1519, Zwingli became the pastor of the Grossmünster in Zürich where he began to preach ideas on reform of the Catholic Church. In his first public controversy in 1522, he attacked the custom of fasting during Lent. In his publications, he noted corruption in the ecclesiastical hierarchy, promoted clerical marriage, and attacked the use of images in places of worship. In 1525, Zwingli introduced a new communion liturgy to replace the Mass. Zwingli also clashed with the Anabaptists, which resulted in their persecution. Historians have debated whether or not he turned Zürich into a theocracy.
The Reformation spread to other parts of the Swiss Confederation, but several cantons resisted, preferring to remain Catholic. Zwingli formed an alliance of Reformed cantons which divided the Confederation along religious lines. In 1529, a war between the two sides was averted at the last moment. Meanwhile, Zwingli's ideas came to the attention of Martin Luther and other reformers. They met at the Marburg Colloquy and although they agreed on many points of doctrine, they could not reach an accord on the doctrine of the Real Presence of Christ in the Eucharist.
In 1531 Zwingli's alliance applied an unsuccessful food blockade on the Catholic cantons. The cantons responded with an attack at a moment when Zürich was ill-prepared. Zwingli was killed in battle at the age of 47. His legacy lives on in the confessions, liturgy, and church orders of the Reformed churches of today.