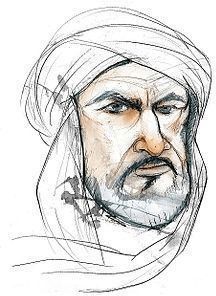 Avempace (– 1138) is the Latinate form of Ibn Bâjja (ابن باجة), full name Abû Bakr Muḥammad Ibn Yaḥyà ibn aṣ-Ṣâ’igh at-Tûjîbî Ibn Bâjja al-Tujibi (ar أبو بكر محمد بن يحيى بن الصائغ التجيبي بن باجة), was an Arab Andalusian polymath: his writings include works regarding astronomy, physics, and music, as well as philosophy, medicine, botany, and poetry.
He was the author of the Kitab al-Nabat ("The Book of Plants"), a popular work on botany, which defined the sex of plants. His philosophic ideas had a clear effect on Ibn Rushd (Averroes) and Albertus Magnus. Most of his writings and book were not completed (or well-organized) because of his early death. He had a vast knowledge of medicine, mathematics and astronomy. His main contribution to Islamic philosophy was his idea on soul phenomenology, which was never completed.
Avempace was, in his time, not only a prominent figure of philosophy but also of music and poetry. His diwan (Arabic: collection of poetry) was rediscovered in 1951.
Though many of his works have not survived, his theories on astronomy and physics were preserved by Maimonides and Averroes respectively, which influenced later astronomers and physicists in the Islamic civilization and Renaissance Europe, including Galileo Galilei.
The Ibn Bajja crater on the Moon is named in his honor.