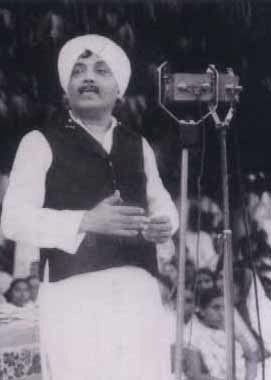 Jhaverchand Meghani (1896-08-28 – Death date:1947.03.09) was a noted poet, writer, social reformer and freedom fighter from Gujarat. He is a well-known name in the field of Gujarati literature. He was born in Chotila. Mahatma Gandhi spontaneously gave him the title of Raashtreeya Shaayar (National Poet). Besides this he received many awards like Ranjitram Suvarna Chandrak and Mahida Paaritoshik in literature. He authored more than 100 books. His first book was a translation work of Rabindranath Tagore's ballad Kathaa-u-Kaahinee titled Kurbani Ni Katha (Stories of martyrdom) which was first published in 1922. He contributed widely to Gujarati folk literature. He went from village to village in search of folk-lores and published them in various volumes of Saurashtra Ni Rasdhar. He was also the Editor of Phulchhab Newspaper of Janmabhoomi group (which is being published till date from Rajkot).
A sample of his collection of folk tales from Saurashtra has recently been published in English, with the translation done by his son Vinod Meghani. The three volumes published so far are titled A Noble Heritage, A Shade Crimson and The Ruby Shattered.
His poems are taught as a part of syllabus in Gujarat Board Schools (GSEB).