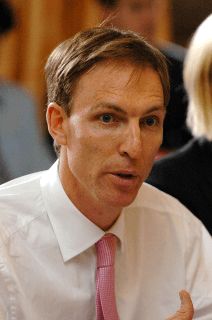 James Francis "Jim" Murphy (born 23 August 1967) is a Scottish former politician who was Leader of the Scottish Labour Party between 2014–15 and a Cabinet Minister in the UK Government. He was the Member of Parliament for East Renfrewshire (formerly named Eastwood) from 1997 until he lost his seat in 2015.
He served as Parliamentary Secretary at the Cabinet Office from 2005 to 2006, Minister of State for Employment and Welfare Reform from 2006 to 2007, the Minister of State for Europe from 2007–08, and the Secretary of State for Scotland in the Cabinet from 2008–10.
After surviving a vote of no confidence, Murphy announced on 16 May 2015 that he would step down as Leader of the Scottish Labour Party on 13 June. The national executive voted 17-14 in favour of his remaining in the role, more than had voted for him in his initial bid for election. He stood down on 13 June 2015.