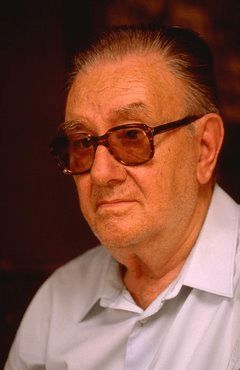 Joan Brossa (ʒuˈam ˈbɾɔsə; 19 January 1919 – 30 December 1998) was a Spanish poet, playwright, graphic designer and visual artist. He wrote his huge literary work in the Catalan language only.
He was one of the founders of both the group and the publication known as Dau-al-Set (1948) and one of the leading early proponents of visual poetry in Catalan literature. Although he was in the vanguard of the post-war poets. He also wrote hundreds of formally perfect sonnets, saphic odes and sestinas as well as thousands of free and direct poems. His creative work embraced every aspect of the arts: cinema, theatre (more of 360 pieces), music, cabaret, the para-theatrical arts, magic and the circus.