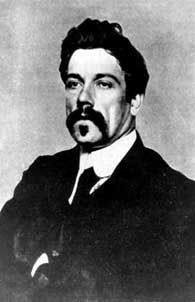 Edmund John Millington Synge (sɪŋ; 16 April 1871 – 24 March 1909) was an Irish playwright, poet, prose writer, travel writer and collector of folklore. He was a key figure in the Irish Literary Revival and was one of the co-founders of the Abbey Theatre. He is best known for his play The Playboy of the Western World, which caused riots in Dublin during its opening run at the Abbey Theatre.
Although he came from a privileged Anglo-Irish background, Synge's writings are mainly concerned with the world of the Roman Catholic peasants of rural Ireland and with what he saw as the essential paganism of their world view. Synge developed Hodgkin's disease, a metastatic cancer that was then untreatable. He died several weeks short of his 38th birthday as he was trying to complete his last play, Deirdre of the Sorrows.