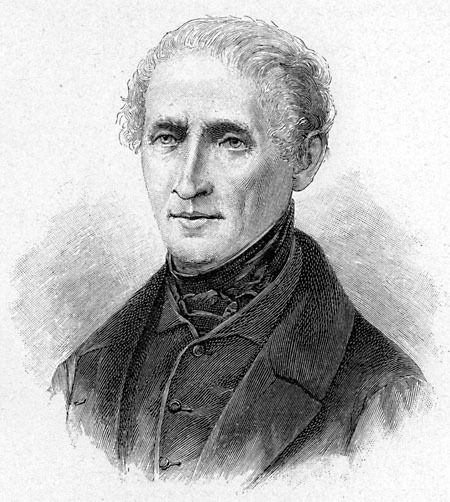 Joseph Freiherr von Eichendorff (10 March 1788 – 26 November 1857) was a Prussian poet, novelist, playwright, literary critic, translator, and anthologist. Eichendorff was one of the major writers and critics of Romanticism. Ever since their publication and up to the present day, some of his works have been very popular in Germany.
Eichendorff first became famous for his 1826 novella Memoirs of a Good-for-Nothing (German: Aus dem Leben eines Taugenichts) and his poems. The Memoirs of a Good-for-Nothing is a typical Romantic novella whose main themes are wanderlust and love. The protagonist, the son of a miller, rejects his father's trade and becomes a gardener at a Viennese palace where he subsequently falls in love with the local duke's daughter. As, with his lowly status, she is unattainable for him, he escapes to Italy - only to return and learn that she is the duke's adopted daughter, and thus within his social reach. With its combination of dream world and realism, Memoirs of a Good-for-Nothing is considered to be a high point of Romantic fiction. One critic stated that Eichendorff’s Good-for-Nothing is the "personification of love of nature and an obsession with hiking." Thomas Mann called Eichendorff's Good-for-Nothing a combination of "the purity of the folk song and the fairy tale."
Many of Eichendorff's poems were first published as integral parts of his novellas and stories, where they are often performed in song by one of the protagonists. The novella Good-for-Nothing alone contains 54 poems.