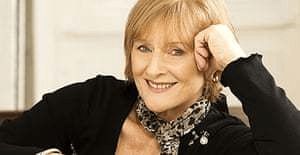 Josephine Cox (born 1941), also known as Jo Cox, is an English author. Her books are frequently best sellers and the UK Public Lending Rights figures often list her in the top three borrowed authors.
Born in a cotton mill house in Blackburn, Cox was one of ten children. At the age of sixteen, she met and married her husband Ken, and had two sons. When her children started school, she went to college, eventually gaining a place at the University of Cambridge, but was unable to accept her place as it would have meant living away from home but she did go on to become a teacher. Cox won the "Superwoman of Great Britain Award", for which her family had secretly entered her, at the same time as her first full-length novel was accepted for publication.
She has also written under the name of Jane Brindle, her mother's name. She has written over 50 books.