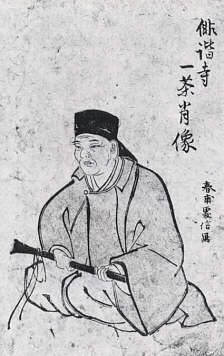 Kobayashi Issa 小林 一茶 was a Japanese poet and lay Buddhist priest of the Jōdo Shinshū sect known for his haiku poems and journals. He is better known as simply Issa 一茶, a pen name meaning Cup-of-tea (lit. "one [cup of] tea"). He is regarded as one of the four haiku masters in Japan, along with Bashō, Buson and Shiki — "the Great Four."
Reflecting the popularity and interest in Issa as man and poet, Japanese books on Issa outnumber those on Buson and almost equal in number those on Bashō.