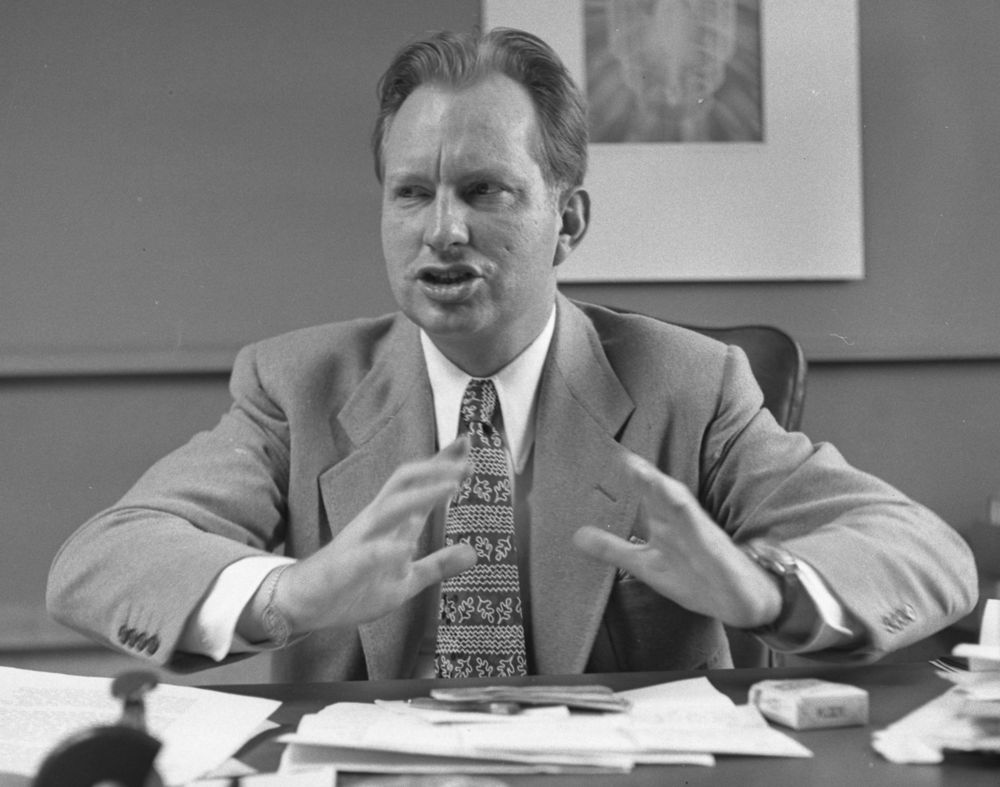 Lafayette Ronald Hubbard (ˈhʌbərd HUB ərd; March 13, 1911 – January 24, 1986), often referred to by his initials LRH, was an American author and the founder of the Church of Scientology. After establishing a career as a writer of science fiction and fantasy stories, in 1950 he published a "branch of self-help psychology" called Dianetics. Hubbard subsequently developed his ideas into a new religious movement that he called Scientology. Hubbard was cited by Smithsonian magazine as one of the 100 most significant Americans of all time.
Born in Tilden, Nebraska in 1911, Hubbard spent much of his childhood in Helena, Montana. After his father was posted to the U.S. naval base on Guam, Hubbard traveled to Asia and the South Pacific in the late 1920s. In 1930, Hubbard enrolled at George Washington University to study civil engineering, but dropped out in his second year. He began his career as a prolific writer of pulp fiction stories and married Margaret "Polly" Grubb, who shared his interest in aviation.
Hubbard served briefly in the Marine Corps Reserve and was an officer in the Navy during World War II. He briefly commanded two ships, but was removed from command both times. The last few months of his active service were spent in a hospital, being treated for a duodenal ulcer.
After the war, Hubbard moved into the Pasadena mansion of occultist and engineer Jack Parsons. In early 1946, Hubbard and Parsons collaborated on Babalon Working, a series of magic ceremonies or rituals. Hubbard became sexually involved with Parsons's 21-year-old girlfriend, Sara "Betty" Northrup, ultimately marrying her despite Hubbard still being married to first wife Polly.
In 1950, Hubbard authored Dianetics: The Modern Science of Mental Health and established a series of organizations to promote Dianetics. In 1952, Hubbard lost the rights to Dianetics in bankruptcy proceedings, and he subsequently founded Scientology. Thereafter Hubbard oversaw the growth of the Church of Scientology into a worldwide organization.
During the late 1960s and early 1970s, he spent much of his time at sea on his personal fleet of ships as "Commodore" of the Sea Organization, an elite, paramilitary group of Scientologists. Some ex-members and scholars have described the Sea Org as a totalitarian organization marked by intensive surveillance and a lack of freedom. His expedition came to an end when Britain, Greece, Spain, Portugal, and Venezuela all closed their ports to his fleet.
Hubbard returned to the United States in 1975 and went into seclusion in the California desert. In 1978, a trial court in France convicted Hubbard of fraud in absentia. In 1983 Hubbard was named as an unindicted co-conspirator in an international information infiltration and theft project called "Operation Snow White". He spent the remaining years of his life in a luxury motor home on his California property, attended to by a small group of Scientology officials including his physician. In 1986, L. Ron Hubbard died at age 74.
The Church of Scientology describes Hubbard in hagiographic terms, and he portrayed himself as a pioneering explorer, world traveler, and nuclear physicist with expertise in a wide range of disciplines, including photography, art, poetry, and philosophy. Though many of Hubbard's autobiographical statements have been found to be fictitious, the Church rejects any suggestion that its account of Hubbard's life is not historical fact. In Scientology publications, he is referred to as "Founder" and "Source" of Scientology and Dianetics.
His critics, including son Ronald DeWolf, have characterized Hubbard as a mentally-unstable chronic liar.