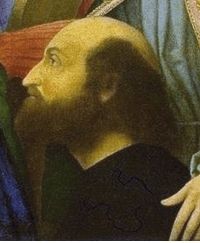 Ludovico Ariosto (ludoˈviːko aˈrjɔsto; ariˈɔsto; 8 September 1474 – 6 July 1533) was an Italian poet. He is best known as the author of the romance epic Orlando Furioso (1516). The poem, a continuation of Matteo Maria Boiardo's Orlando Innamorato, describes the adventures of Charlemagne, Orlando, and the Franks as they battle against the Saracens with diversions into many sideplots. Ariosto composed the poem in the ottava rima rhyme scheme and introduced narrative commentary throughout the work.
Ariosto also coined the term "humanism" (in Italian, umanesimo) for choosing to focus upon the strengths and potential of humanity, rather than only upon its role as subordinate to God. This led to Renaissance humanism.