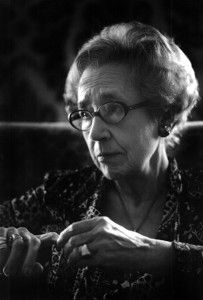 Lydia Cabrera (May 20, 1899 in Havana, Cuba – September 19, 1991 in Miami, Florida) was a Cuban anthropologist.
Cabrera was a Cuban writer and literary activist. She was an authority on Santería and other Afro-Cuban religions. During her lifetime she published over one hundred books; little if any of her work is available in English. Her most important book is El Monte (Spanish: "The Wilderness"), which was the first major anthropological study of Afro-Cuban traditions. Published in 1954, the book became a "bible" for Santeros who practice Santeria, a blend of Catholic teachings and native African religions that evolved among former African slaves in the Caribbean. She donated her research collection to the library of the University of Miami. A section in Guillermo Cabrera Infante's book Tres Tigres Tristes is written under Lydia Cabrera's name, in a comical rendition of her literary voice. She was one of the first writers to recognize and make public the richness of Afro-Cuban culture. She made valuable contributions in the areas of literature, anthropology, and ethnology.
In El Monte, Cabrera fully described the major Afro-Cuban religions: the Regla de Ocha (commonly known as Santeria) and the Ifa’ cult, which are both derived from traditional Yoruba religion; and Palo Monte, which originated in Central Africa. Both the literary and anthropological perspectives on Cabrera’s work assume that she wrote about mainly oral, practical religions with only an “embryonic” written tradition. She is credited by literary critics for having transformed Afro-Cuban oral narratives into literature, which is, written works of art, while anthropologists rely on her accounts of oral information collected during interviews with santeros, babalaos, or paleros, and on her descriptions of religious ceremonies. There is a dialectical relationship between Afro-Cuban religious writing and Cabrera’s work; she used a religious writing tradition that has now internalized her own ethnography.