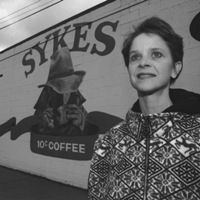 Melanie Rae Thon (born 1957) is an American writer. She is a recipient of a Fellowship in Creative Arts from The John Simon Guggenheim Memorial Foundation, a Whiting Writer's Award from the Whiting Foundation, the Hopwood Award, two Fellowships from the National Endowment for the Arts, the Mountains & Plains Independent Booksellers Association Reading the West Book Award, the Gina Berriault Award, and a Writer's Residency from the Lannan Foundation. In 2009, she was Virgil C. Aldrich Fellow at the Tanner Humanities Center. She has taught at Emerson College, Syracuse University, University of Massachusetts Boston, Ohio State University, and the University of Utah. Born in Montana, Thon currently resides in Salt Lake City, Utah.
Thon's most recent books are Silence & Song (2015), The 7th Man (2015), and The Good Samaritan Speaks (2015). She is also the author of the novels The Voice of the River (2011), Sweet Hearts (2001), Meteors in August (1990), and Iona Moon (1993), and the story collections In This Light (2011), Girls in the Grass (1991), and First, Body (1997).
Thon's short story "Letters in the Snow," is included in the O. Henry Prize Stories 2006. The story was first published in the June 20, 2004 issue of One Story, a literary journal. "Letters in the Snow" is subtitled "for kind strangers and unborn children -- for the ones lost and most beloved." Her fiction has also been included in the anthology series Best American Short Stories (1995, 1996) and three Pushcart Prize Anthologies (2003, 2006, 2008).
In 1996, Granta magazine included Thon on its list of the twenty Best Young American Novelists.