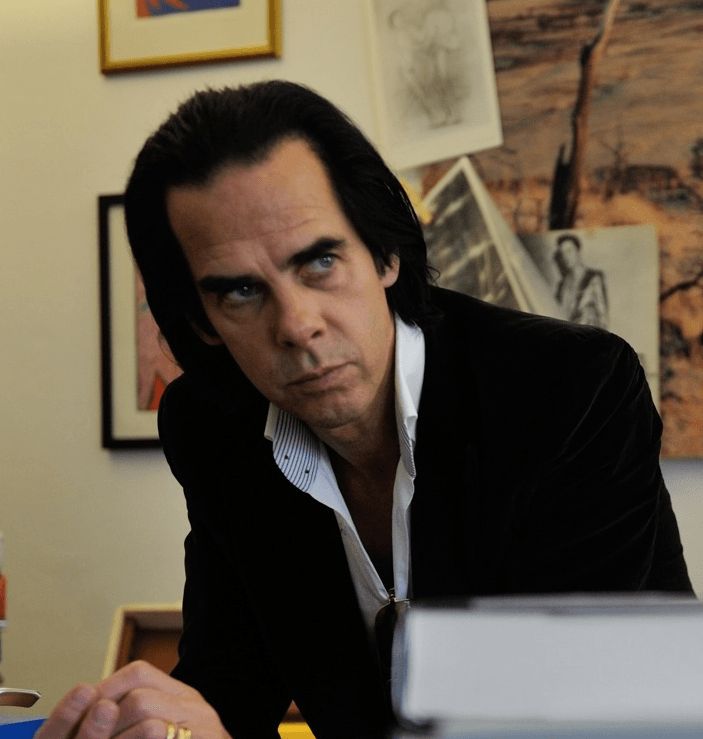 the performer Nick Cave (performance artist)} Nicholas Edward Cave AO} (born 22 September 1957) is an Australian musician, singer-songwriter, author, screenwriter, composer and occasional film actor, best known as the frontman of the rock band Nick Cave and the Bad Seeds. Cave's music is generally characterised by emotional intensity, a wide variety of influences, and lyrical obsessions with death, religion, love and violence.
Born and raised in rural Victoria, Cave studied art before turning to music in the 1970s. As frontman of the Boys Next Door (later renamed the Birthday Party), he became a central figure in Melbourne's burgeoning post-punk scene. The band relocated to London in 1980, but, disillusioned by life there, evolved towards a darker, more challenging sound, and acquired a reputation as "the most violent live band in the world". The Birthday Party is regarded as a major influence on gothic rock, and Cave, with his shock of black hair, baritone singing voice and pale, emaciated look, was described in the media as a poster boy for the genre.
After the break-up of the Birthday Party in 1983, Cave formed Nick Cave and the Bad Seeds. Much of the band's early material was set in a mythic American Deep South, drawing on spirituals and Delta blues, while Cave's preoccupation with Old Testament notions of good versus evil culminated in what has been called his signature song, "The Mercy Seat" (1988). The 1996 album Murder Ballads features "Where the Wild Roses Grow", a duet with Kylie Minogue, Cave's most commercially successful single to date. The band has released 16 studio albums, the most recent being 2016's Skeleton Tree. Cave formed the garage rock group Grinderman in 2006, which has since released two albums.
Cave co-wrote, scored and starred in the 1988 Australian prison film Ghosts... of the Civil Dead (1988), directed by John Hillcoat. He also wrote the screenplay for Hillcoat's bushranger film The Proposition (2005), and composed the soundtrack with frequent collaborator Warren Ellis. The pair's film score credits include The Assassination of Jesse James by the Coward Robert Ford (2007), The Road (2009), Lawless (2012), and Hell or High Water (2016). Cave is the subject of several films, including the semi-fictional "day in the life" 20,000 Days on Earth (2014), and the documentary One More Time with Feeling (2016). Cave has also released two novels: And the Ass Saw the Angel (1989) and The Death of Bunny Munro (2009).
Cave's songs have been covered by a wide range of artists, including Johnny Cash, Metallica and Arctic Monkeys. He was inducted into the ARIA Hall of Fame in 2007.