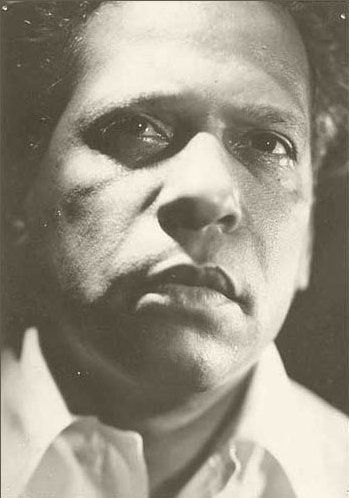 the Cuban poet the documentarian filmmaker (his nephew) Nicolás Guillén Landrián} Nicolás Cristóbal Guillén Batista (10 July 1902 – 16 July 1989) was a Cuban poet, journalist, political activist, and writer. He is best remembered as the national poet of Cuba.
Born in Camagüey, he studied law at the University of Havana, but abandoned a legal career and worked as both a typographer and journalist. His poetry was published in various magazines from the early 1920s; his first collection, Motivos de son (1930) was strongly influenced by his meeting that year with the African-American poet, Langston Hughes. He drew from son music in his poetry. West Indies, Ltd., published in 1934, was Guillén's first collection with political implications. Cuba's dictatorial Gerardo Machado regime was overthrown in 1933, but political repression intensified. After being jailed in 1936, Guillén joined the Communist Party the next year, traveling to Spain for a Congress of Writers and Artists, and covering the Spanish Civil War as a magazine reporter.
After returning to Cuba, he stood as a Communist in the local elections of 1940. This caused him to be refused a visa to enter the United States the following year, but he traveled widely during the next decades in South America, China and Europe. In 1953, after being in Chile, he was refused re-entry to Cuba and spent five years in exile. He returned after the successful Cuban revolution of 1959. From 1961 he served more than 25 years as president of the Unión Nacional de Escritores de Cuba, the National Cuban Writers' Union. His awards included the Stalin Peace Prize in 1954, the 1976 International Botev Prize, and in 1983 he was the inaugural winner of Cuba's National Prize for Literature.