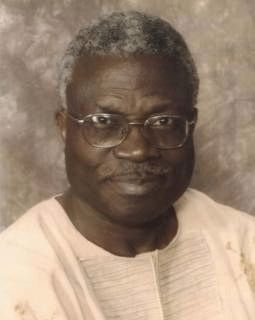 Niyi Osundare (born 1947 in Ikere-Ekiti, Ekiti State, Nigeria) is a prolific poet, dramatist and literary critic. He gained degrees at the University of Ibadan (BA), the University of Leeds (MA) and York University, Canada (PhD, 1979). Previously professor (from 1989) and Head of English (1993–97) at the University of Ibadan, he became professor of English at the University of New Orleans in 1997. Osundare has a wife, Kemi, and three children, two girls and a son who still lives in Nigeria. His deaf daughter is the real reason Niyi settled in the United States. She could not go to school in Nigeria so they found a school in the U.S. for her. They moved with her so as to be closer to her.As well as this he has been used in many schools as an example of a poet.
He has always been a vehement champion of the right to free speech and is a strong believer in the power of words, saying, "to utter is to alter". Osundare is renowned for his commitment to socially relevant art and artistic activism and has written several open letters to the former President of Nigeria (Olusegun Obasanjo), whom Osundare has often publicly criticised.
Osundare believes that there is no choice for the African poet but to be political: "You cannot keep quiet about the situation in the kind of countries we find ourselves in, in Africa. When you wake up and there is no running water, when you have a massive power outage for days and nights, no food on the table, no hospital for the sick, no peace of mind; when the image of the ruler you see everywhere is that of a dictator with a gun in his hand; and, on the international level, when you live in a world in which your continent is consigned to the margin, a world in which the colour of your skin is a constant disadvantage, everywhere you go – then there is no other way than to write about this, in an attempt to change the situation for the better."
Under the rule of the dictator General Sani Abacha (1993–98), Osundare regularly contributed poems to a Nigerian national newspaper (now part of the collection Songs of the Season) that criticised the regime and commented upon the lives of people in Nigeria. As a result, he was frequently visited by Security Agents and asked to explain his poems and to whom they referred: "By that time I realized that the Nigerian security apparatus had become quite 'sophisticated', quite 'literate' indeed!""A couple of my students at the University of Ibadan had become informers; a few even came to my classes wired. And when I was reading abroad, someone trailed me from city to city. At home, my letters were frequently intercepted."
In 1997, he accepted a teaching and research post at the University of New Orleans. In 2005 Osundare was caught in Hurricane Katrina, and he and his wife were stuck in their attic for 26 hours. Their neighbour, who at the time was driving by in his boat, heard their shouts for help. They were rescued and bounced around from rescue shelters till they ended up in Rindge, New Hampshire, where Osundare could get a teaching job as a professor at Franklin Pierce College till things settled down.
Osundare is a holder of numerous awards for his poetry, as well as the Fonlon/Nichols award for "excellence in literary creativity combined with significant contributions to Human Rights in Africa".
His 60th Birthday Literary Fete took place at venues in Ikere-Ekiti, Ibadan and Lagos state of Nigeria in March 2007.
His poem "Not My Business" is compulsory study in the AQA A syllabus for GCSE English Language.
In December 2014, Osundare was awarded the Nigerian National Merit Award (NNMA) for academic excellence.