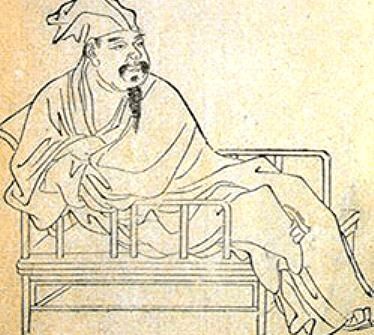 Ouyang Xiu (1 August 1007 – 22 September 1072), courtesy name Yongshu, also known by his art names Zuiweng ("Old Drunkard") and Liu Yi Jushi ("Retiree Six-One"), was a Chinese scholar-official, essayist, historian, poet, calligrapher, and epigrapher of the Song dynasty. A much celebrated writer, both among his contemporaries and in subsequent centuries, Ouyang Xiu is considered the central figure of the Eight Masters of the Tang and Song. It was he who revived the Classical Prose Movement (first begun by the two Tang dynasty masters two centuries before him) and promoted it in imperial examinations, paving the way for future masters like Su Shi and Su Zhe.
Ouyang Xiu's interests as a writer were remarkably diverse. As a historian, he was put in charge by Emperor Renzong of Song of creating the New Book of Tang, which was completed in 1060. He also wrote in his spare time the Historical Records of the Five Dynasties, the only book in the Twenty-Four Histories to have been written in private by a single author. As a poet, he was a noted writer of both the ci and shi genres. But it was his prose writings like Zuiweng Tingji that won him the greatest acclaim. Treatises from Ouyang's voluminous oeuvre range from studies of flowers to literary criticism and political commentaries.
Politically, Ouyang Xiu was one of the major proponents of the Qingli Reforms of the 1040s. When lead reformer Fan Zhongyan fell from power in 1045, Ouyang was also demoted to posts away from the capital. He returned to the central government only in 1054, and gradually moved up the bureaucratic ladder again, until in 1060 he was made the assistant councilor of the state. He retired from politics in 1071, after vehemently (and unsuccessfully) opposing the New Policies of Wang Anshi, whose career he very much helped.