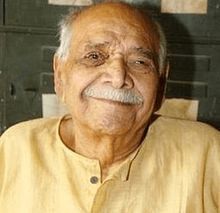 Ram Sharan Sharma (26 November 1919 – 20 August 2011), commonly referred to as R. S. Sharma, was an eminent historian and academic of Ancient and early Medieval India. He taught at Patna University and Delhi University (1973–85) and was visiting faculty at University of Toronto (1965–1966). He also was a senior fellow at the School of Oriental and African Studies, University of London. He was a University Grants Commission National Fellow (1958–81) and the president of Indian History Congress in 1975. It was during his tenure as the dean of Delhi University's History Department that major expansion of the department took place in the 1970s. The creation of most of the positions in the Department were the results of his efforts. He was the founding Chairman of the Indian Council of Historical Research (ICHR) and a historian of international repute.
During his lifetime, he authored 115 books published in fifteen languages. He influenced major decisions relating to historical research in India in his roles as head of the departments of History at Patna and Delhi University, as Chairman of the Indian Council of Historical Research, as an important member of the National Commission of the History of Sciences in India and UNESCO Commission on the history of Central Asian Civilizations and of the University Grants Commission and, above all, as a practising historian. At the instance of Sachchidananda Sinha, when Professor Sharma was in Patna College, he worked as a special officer on deputation to the Political Department in 1948, where prepared a report on the Bihar-Bengal Boundary Dispute. His pioneering effort resolved the border dispute forever as recorded by Sachchinand Sinha in a letter to Rajendra Prasad.